BOUGHT OUT AND $PENT, Recovery from Compulsive Shopping and Spending
By Terrence Daryl Shulman 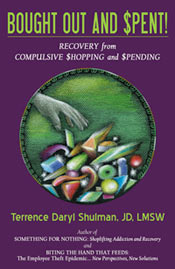 Mr. Shulman’s third book, Bought Out and $pent! (2008) was one of the early books on compulsive shopping and spending. It’s a book aimed at a wide audience and explores our relationship to money, things, credit cards, and saving (or lack thereof). It sounds the alarm about how insidious and powerful our consumer culture is becoming—especially with the ever-increasing ubiquity of advertising, technology, and easy credit and 24/7 access to purchasing with the tap of a finger (and, now, with a brief vocal request to Siri, Echo or Alexa!). Filled with provocative theories and stories of some of the clients Mr. Shulman has treated, you are bound to learn something new and valuable about yourself and, perhaps, even your loved ones.

This book about compulsive spending is divided into four parts:

Some quotes from the inside cover:

"My fear and cry for help led me to Mr. Shulman. After a year of counseling I continue to grow and become the person I wanted to be all along. He helped me understand I'm not a bad person, I just made bad decisions. He opened the doors so I could forgive myself and heal."—Suzie, Georgia

"Thanks to Terry I was able to get a handle on my life. It was not easy. I had to revisit 50 years of my life: how-when-where-why? The light finally came on. I needed to like myself, take care of myself, and love myself. Now I do and everything has changed! I used to take care of everyone else first. I still share and care but I include myself now. When leaving a store now. I can say I had a successful day and mean it."—S.K., Ontario, Canada

"My work with Terry has been very enlightening! He guided me on a path of self-discovery and growth and offered the support I needed. Through the 10 sessions, I learned many new skills for living with this addiction, had the chance to try them out and then got to share my experiences in my next session. I felt that together we built a solid base for my recovery and I highly recommend Mr. Shulman's counseling."—T.C., Chicago

"My willingness to change and Mr. Shulman's program have truly changed me. If I had known about this program earlier, I could have avoided so much pain, trouble and legal issues." —A.C., New Orleans

PART ONE
A Human Face on Compulsive Shopping and Spending

We all have money issues. I know I do. We’re usually feeling like we want or need more of it. We’re trying to earn more, spend less, save or invest more; yet, we also want more, need more, feel we deserve more, and dread the feeling of losing or just maintaining our current lifestyle.

I believe something else is happening. A dangerous mindset has taken root: spend now and worry later—or, better yet, don’t worry at all! Welcome to the world of addiction: the world of more, more, more. It’s a world of imbalance, of denial, and of insanity. It’s more than plain greed.

You’ve probably noticed a growing trend over the last decade or so. From Suze Orman to Dave Ramsey to Oprah’s “Debt Diet” to A&E TV’s “Big Spender” to books, articles, television and radio shows: calls near and far are sounding the alarm about our individual and collective problems with debt and spending.

Everywhere we look and listen: there are warning signs that something is out of balance: a looming recession, wild stock market swings, a housing market bust with record foreclosures, consumer credit card debt at an all time high! We’ve been told recently that we’re not in a recession but “a slow down.”

We were given easy credit, no money down, and promised “The American Dream.” Look what’s happening?

As Americans, we work longer hours, take less vacation time, have more health issues such as lack of sleep, depression, anxiety, and obesity, and report less overall satisfaction with life. As we continue to emulate and chase the lifestyles of the “rich and famous,” we pay a devastating toll being--individually and collectively.

Yet, many of us continue to spend like there’s no tomorrow. And, for many, there may not be a tomorrow. Our attitudes and culture of consumerism have reached a breaking point over the last few decades.

As with many issues, we seem to have a split personality—again, individually and collectively. On the one hand, we have a trend toward hyper-consumerism best illustrated by the blossoming of magazines and TV shows pushing the lure of haute couture and mocking—tongue-in-cheek—the excesses of shopping and spending—from “Sex in The City” to the chick-lit “Confessions of a Shopaholic” novellas which will be released as a major motion picture this year.

On the other hand, we have a growing movement saying slow down—from Suze Orman to, less stylistically, the movies “What Would Jesus Buy,” “Maxxed Out,” and the underground films “Money as Debt,” Freedom to Fascism,” and “Zeitgeist.”

In 2006, a landmark Stanford University study concluded that something else may better describe the phenomenon that is growing among millions of people. It is called” compulsive buying disorder.” While still controversial—there’s a tendency to call it “poor money management”—the hope is that it opens a new window towards prevention and treatment of persons whose buying and spending may not be helpable through conventional approaches such as just cutting up credit cards or trying to follow a financial advisor’s counsel.

Sometimes there may be a problem with debt but not so much because of shopping—one may not shop regularly but may spend too much money on occasional larger purchases such as a home, a car, a vacation; or, one may spend too much on dining out, concerts, the theatre, etc. Likewise, one may have a compulsive shopping or spending problem but not be in debt—there may be other consequences like loss of time or interest in relationships, avoidance of emotions or of obligations.

Some common reasons why people overshop or overspend include the following:

Compulsive shoppers—often referred to as “shopaholics” can sometimes be described in categories such as these:

This book isn’t a book about finances from the viewpoint of how to make more money or how to save more money. It’s more about our emotional and psychological relationship to money and to things. It’s about going deeper—to the roots.

My interest in this subject is also personal.

I began to see how our relationship to money and to things is a huge source of wounding and pain in my clients—and most people in general. Therefore, creating a new relationship with money and things can, equally, bring healing and peace.

Since 2004, I began counseling compulsive shoppers and spenders in addition to my primary work with people who compulsively steal. Often, both behaviors—compulsive theft and spending—are present either at the same time or at different stages.

Remember the old saying: “you can’t solve most issues with money or things.” Most of us have experienced this lesson already. We see how “the rich and famous” still have problems—and that’s just the ones we hear about. We’ve heard the stories of lottery winners who blow their money all too quickly, fall into depression or addictions, or who end up saying they wish they’d never won. Yet, we still buy into the fantasy that more money or more things will make us happy.

I hope this book is another offering among the many out there which helps us look at, understand better, and make the necessary changes in our lives so we may live our best lives possible.

Back to top of the Preface

If you’re reading this book, either you or someone you know may have serious problems with shopping or spending. There are different ways to determine if there’s really a problem. If you think there’s a problem, usually there is. If others think you have a problem, there usually is. Ultimately, each one of us has to decide for him or herself.

Take the following quizzes and take an honest accounting…

This questionnaire is adapted from the Gamblers Anonymous 20 Questions.

Debtors Anonymous & professional counseling should be recommend for compulsive shoppers/spenders.

If you answered yes to eight or more of these questions, the chances are that you have a problem with compulsive debt, or are well on your way to having one. If this is the case, today can be a turning point in your life.

Back to top of the Introduction

Copyright © 2011 by Terrence Daryl Shulman All rights reserved. No part of this book shall be reproduced or transmitted in any form or by any means, electronic, mechanical, magnetic, photographic - including photocopying, recording or by any information storage and retrieval system, without prior written permission of the publisher. No patent liability is assumed with respect to the use of the information contained herein. Although every precaution has been taken in the preparation of this book, the publisher and author assume no responsibility for errors or omissions. Neither is any liability assumed for damages resulting from the use of the information contained herein. Published by: InfinityPublishing.com • 519 West Lancaster Avenue • Haverford, PA 19041-1413