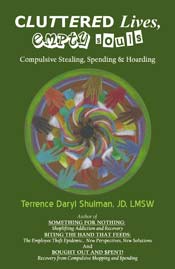 Mr. Shulman’s fourth and most recent book, Cluttered Lives, Empty Souls (2011) revisits and expands upon his first three books with updated information and theory on shoplifting, employee theft, and Overshopping/overspending along with new client case studies.

The book also includes a mini-chapter on rule-breaking and risk-taking behavior, and 50 pages on the “disorder du jour”: hoarding. Cluttered Lives also includes interviews with some of the author’s colleagues in the field and draws together a new thesis on our relationship with stuff—whether it’s stolen, bought, or hoarded—and what it may mean for our individual and collective futures!

This book is divided into eight parts:

This is a book about real people and real pain: about what causes our pain; about avoiding our pain; about misdirected cries of pain; about the ways we cry out in pain and how they, tragically, cause more pain—for ourselves and others.

This is a book about the pain which causes people to shoplift and steal, overshop and overspend, hoard and clutter, and lie, cheat, break rules, and take destructive risks.

This is a book about the pain these behaviors—these disorders—cause ourselves and others.

A glance at the headline news on any given day reveals countless stories, low- and high- profile, on these topics:

Shoplifting: The recession has brought a wave of "retail fraud" (as it's often called)— some of it petty and more of it perpetrated by "professional shoplifters" or rings—(ORT or ORC: organized retail theft or retail crime). Then there's Lindsay Lohan—the Winona
Ryder of her day—and the countless other stars, athletes, politicians, and dignitaries  who've been arrested for pilfering (Farrah Fawcett, Bess Myerson, Rex Reed, Jennifer  Capriati, Reds' pitcher Mike Leake, Caroline Guiliani, Canadian MP Sven Robinson,  former Bush aide Claude Allen, and the list goes on). CBC and CNBC recently aired The  Truth about Shoplifting.

Employee Theft/Credit Card Fraud/Identity Theft: The recession, technology, the Internet,  and greed led the FBI to call these three of "the fastest growing crimes in America."  What's the difference between the employee who loafs on the job ("time theft") and the  CEOs of investment firms and mortgage lenders that nearly brought down the U.S. and  world economy? The employee's more likely to get caught, confronted and fired; the  CEOs rarely get caught or confronted and, if they do, they get rewarded. Houston, we have a problem. TV shows such as American Greed: Scams, Schemes and Broken Dreams highlight various growing theft and fraud trends. Shame is getting hard to come  by!

Overshopping/Overspending: As our government argues over how to make the smallest dent in our $14 Trillion deficit and whether to "raise the debt limit," millions of  Americans—and others around the world—suffer financial distress, random as well as  self-inflicted from under-saving, overspending, and falling victim to a bad case of  "affluenza." Keeping up with the Joneses was never more epic; the new Joneses are the  "stars" in the media. But even they fall prey to our culture of excess: Victoria Beckham,  Nicolas Cage, Jennifer Hudson, Michael Jackson, Sarah Jessica Parker (who knew Carrie  Bradshaw was no acting stretch?), and Newt Gingrich show that men and women alike  get hooked. TV shows like Big Spender, Suze Orman, Dave Ramsey, and Oprah's Debt  Diet have been bellwethers of these crises.

Hoarding: When everyone and his brother bought a home before the housing bubble  burst, we had to fill those homes up, didn't we? And if there wasn't enough room in your  McMansion, have we got a storage unit for you! Or two, or three or four! The recent  popularity of such shows as Hoarders, Hoarding: Buried Alive, and Enough Already! all  prove clutter is king—at least in ratings-land. And for every "packrat" still hidden behind  closed doors, more public faces of this disorder are "coming out," including Micahaele  Salahi, Heidi Montag and Spencer Pratt, Lisa Kudrow, Mariah Carey, Kevin Federline,  Celine Dion, Marie Osmond and Paris Hilton—17 dogs counts as animal hoarding!

Rule Breaking and Risk Taking: Aside from the countless short-cuts and loopholes most  of us take from time-to-time, our leaders, role models, and stars can't seem to play by the rules either. Recently, we saw Arnold Schwarzenegger, Lance Armstrong, and Charlie  Sheen stoop to new lows—not winning, but losing—public respect and support. When  did lying, hubris, and narcissism become the norm? Shows such as The Real Hustle and The Takedown are merely more direct examples of rule breaking and risk taking than we  see from "the good guys" in 24 or any other hero/rescue drama.

What do stealing, spending and hoarding have in common?

Over the last decade, I've counseled nearly 500 clients with various combinations of  these disorders. I wrote this book, in part, to better understand and explain the underlying  similarities and commonalities between them. All addictions share similar features and  consequences but a few things stand out when working with compulsive stealing,  spending and hoarding. On first look, all three disorders appear to focus and depend on  the acquisition of things. There also seems to be a focus on money—either saving money  or having more money through stealing; spending money or even getting a bargain; or  hoarding money or avoiding losing money by getting rid of things perceived as valuable.  People can steal, buy, or hoard money or objects from stores, work, or others. There also  seems to be a preoccupation with time—and time is money: saving time by stealing,  saving time by buying, saving time by hoarding and not discarding. The irony, of course,  is that people who compulsively steal, spend or hoard spend an inordinate amount of time  not only engaged in these activities but in thinking about doing them as well as stopping  them.

There appears to be extreme boundary issues for people who compulsively steal, spend or  hoard. And while all addictions adversely affect others besides the addict, many  addictions (such as overeating, drugging, and drinking) are, in one sense, primarily self- destructive. Stealing requires a victim, a violation of the law, ethics, and actual  boundaries. Spending—especially compulsive spending—often requires a victim, too:  debts that often can't be repaid (though it may be hard for some to see credit card  companies as victims); but also "financial infidelity"—the violation of budgetary agreements with a spouse, family member, friend, or business partner. The compulsive  overspender, like the compulsive overeater, can't adhere to the bounds of the bank account (the body) and takes on debt as if calories or pounds. In addition, it's common  that persons who overspend and are in debt resort to stealing out of desperation.  Compulsive hoarders—especially when they don't live alone—crowd out the legitimate  living spaces of others, violating their physical and emotional boundaries. Hoarders, too,  may overspend, steal, hide, and lie. They may also put others who live with them at risk  for disease, accident, fire hazard, or eviction.

These violations of the boundaries of others are anathema to their common traits of codependency and excessive empathy which belie their narcissistic tendencies stemming  from beliefs they're inadequate and unlovable. Those who compulsively steal spend, or  hoard do so for themselves but, often steal, spend or hoard for the benefit of others as  well: thus, stolen, bought, or hoarded gifts. It's also typical these persons have  experienced being victimized in their lives and felt deprived materially and/or  emotionally. Thus, they become obsessed with making things right, evening the score, and  feel both entitled to their excesses and out of touch with the outrage and negativity their  behaviors evoke in others. People who steal, overspend, and hoard are no strangers to legal issues, including criminal or incarceration, financial or bankruptcy, employment or  loss of job, divorce or child custody, eviction or foreclosure, or other liability.

Another common feature is a persistent thinking, feeling and attitude of lack, emptiness,  scarcity, and inadequacy which they attempt to correct through accumulation of money  and/or things. Anxiety is a common feeling for these folks. In short, they tend to feel "I'm not enough… unless I have enough." But, for them, it's never enough. The source of  these thoughts, feelings and attitudes may be partly attributed to brain chemistry (nature)  but it's safe to say a fair amount of nurture (familial, cultural, and societal) is at play; they seem to be particularly susceptible to attaching their inherent value to money and/or things.

It bears repeating individual stealing, spending and hoarding mirrors these trends in  society; it's chicken-and-egg.

So, we can look at these similarities and commonalities in this chart form—there may be
others we haven't yet listed:

Note: I'll publish a workbook companion to this book soon.

Back to top of Preface

Nobody tries to steal your troubles, and no one can take your good deeds.—Yiddish folk saying

Anyone who lives within their means suffers from a lack of imagination.—Oscar Wilde

Beauty is Nature's coin, must not be hoarded, must be current. —John Milton

Laws bind us. But it's important to remember the law is only what's popular, not what's right or wrong.—Marilyn Manson

Even stats about shoplifting and employee theft in general are hard to come by. But it's safe to say that stealing, overspending and hoarding are growing problems which we as a people are slow to recognize or confront. It's my humble hope that books such as this one help provoke an awareness of and desire to creatively offer solutions for these individual and social problems. Consider the following statistics:

It's easy to feel discouraged by the scope and magnitude of the dishonesty and insanity in our midst. One way to stay positive is to remember that sometimes things have to get worse before they get better. Another reason to hold cautious optimism is that the problems of stealing, overspending, and hoarding have been increasingly highlighted as true disorders which can be treated. And just as one person can create a lot of chaos in his  own world and the world around him; so, too, can a person who wakes up and finds help similarly create health, hope, and healing.

Back to top of the Introduction

Copyright © 2011 by Terrence Daryl Shulman All rights reserved. No part of this book shall be reproduced or transmitted in any form or by any means, electronic, mechanical, magnetic, photographic - including photocopying, recording or by any information storage and retrieval system, without prior written permission of the publisher. No patent liability is assumed with respect to the use of the information contained herein. Although every precaution has been taken in the preparation of this book, the publisher and author assume no responsibility for errors or omissions. Neither is any liability assumed for damages resulting from the use of the information contained herein. Published by: InfinityPublishing.com • 519 West Lancaster Avenue • Haverford, PA 19041-1413