SOMETHING FOR NOTHING, Shoplifting Addiction And Recovery
By Terrence Daryl Shulman 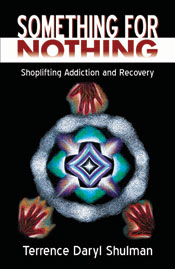 Something for Nothing (2003) is Mr. Shulman’s first book and his best-seller. It chronicles his own personal story of his descent into a decade-long secret life of shoplifting and employee theft, the eventual consequences, and his harrowing but determined journey to lift himself out of the abyss. Written in a direct, powerful and humanizing way, he recounts how he pulled himself up from the brink of suicide, through his shoplifting arrest in the middle of law school, to starting a self-help movement, publishing this book, and appearing less than a year later on The Oprah Winfrey Show.

… You are not alone.

It's this incredible rush! It's like getting something for nothing!

Statistics reveal that most people who shoplift do so not out of economic need or greed but in response to pressures and emotional issues in their lives. "Something for Nothing" is a disease that affects millions. Whether this is a particularly American phenomenon begs to be studied but this problem pervades the planet.

We are living in the age of Winona Ryder and Enron. Anger and skepticism toward thievery abound. But this is not a book about Winona or Enron. There is something else going on besides simple greed. People try to get ahead at any cost. People feel it's never enough. It's beyond money. It's beyond dollars and cents. It's beyond sense.

It seems we, individually and collectively, feel an increasing emptiness.

The simplistic notion that shoplifting and stealing are merely legal or moral issues is wrong.

There appears to be more dishonesty than ever these days; yet, tougher laws, more sophisticated security systems, and endless moralism haven't reduced these offenses. In fact, they're on the rise. Stealing, particularly shoplifting, can and often does become addictive.

I'm aware many feel we've gone overboard in labeling everything an addiction, a disease, an illness over which people have limited power and control. Most people understand and accept alcohol and drug addictions. They acknowledge gambling, sex, eating, or shopping as addictions.

But people doubt anyone shoplifting or stealing may also be crying out for help. Because we have no real understanding or acceptance of this, those who suffer sink farther into shame, ignorance and denial, and get farther from the sparse real help available. The person, the family, businesses, the economy, and society all suffer for it.

Shoplifting is the primary form of theft I will address in this book but I will touch upon others as well. I do not make excuses for stealing, breaking the law, or dishonesty in general. But I do intend to challenge the notion that most shoplifters are "plain thieves."

This is the first book written on this subject by recovering shoplifter. I may be accused of bias. So be it. During my recovery, I found no literature to help me. I felt alone. I looked for self-help and support groups. There were none. In 1992 I started a self-help group called C.A.S.A., which stands for Cleptomaniacs And Shoplifters Anonymous. I changed the "K" to a "C" to create the acronym "Casa" which means "home" in Spanish. I wanted to create a safe place for people to share and get help. I intended the group's focus to be on shoplifting but did not want to exclude people who had other forms of addictive theft; thus, I included the term kleptomania as an implied catch-all for stealing issues.

This is the first book written on this subject which posits shoplifting as an addiction rather than an impulse control disorder, kleptomania, or a condition which must be treated primarily with medication, therapy or both. I am taking this subject matter to the heart of mainstream thinking, hopefully making it more accessible and less shameful.

I hope this book will inspire people to form self-help groups throughout the country and the world where shoplifting addicts can receive and, ultimately, give help. Currently there is no national "umbrella" group for shoplifters. I know of groups only in Manhattan, Minneapolis, San Francisco, and here in Detroit. There are court-ordered educational groups in most states which address shoplifting and economic crimes but most take place over several hours and are of limited value, especially to anyone addicted to shoplifting.

Since starting an online presence in 1995, I have received thousands of e-mail messages seeking information and support. Most people ask if there's a group in their town. Time and time again I've had to tell them: "Not yet. Start one like I did." But few have. Why not? This is the cutting edge. Substantial individual and collective ignorance persists about shoplifting as an addictive-compulsive disorder. Those who know they have a problem feel such overwhelming shame they would never think to tell anyone or seek help. The fear and shame of attending a shoplifting support group, much less starting one, is enormous. I've met people who feel too ashamed to tell their own therapists they shoplift. They fear judgment so they stay silent.

It may take another generation before we have shoplifting recovery groups across the country. But it will happen. There is a need which will be met.

Neither my story nor the stories that follow are intended to make excuses for stealing or shoplifting. I'm not suggesting shoplifting addicts go unpunished. Any illegal act, be it illegal gambling, drug offenses, or drunk driving, must have legal consequences. However, our stories illustrate how good but vulnerable people try to cope with life at pivotal times and how punishment is not enough to stop shoplifters. Our stories go more in depth than previous stories in the scant literature available on shoplifting or kleptomania. I hope this will provide clarity and hope for those who have little of either.

My main intent is to create more awareness of and understanding about shoplifting addiction and offer more solutions so people can get the help they need. Not all people cope the same way and addictions have their similarities but also their differences. People who get hooked on shoplifting need specialized treatment.

Thirteen years ago, I started a new life when I decided I wanted to stop shoplifting. There are millions for whom shoplifting remains "a cry for help." I didn't know how much of a problem it was in my life until I woke up. I'm still waking up every day. I got my life back from the brink of suicide and found it is worth living, with all its challenges and uncertainties, its pains and frustrations.

As the second anniversary of 9/11 approaches, one may ask: What does a book on shoplifting addiction matter in the grand scheme of things? I hope this book will be part of a larger solution. There really is no such thing as something for nothing. I hope you will join me in some way to reshape the world into a more honest, trusting, and healed place. A place where fewer people try to get something for nothing and more give something for nothing.

"With true giving, after having given, we have more, not less."*

Back to top of the Preface

I believe we develop beliefs throughout our lives which become our truths.

Over the years of exploring my beliefs as well as those of thousands of shoplifters-in person, by e-mail, letter, and phone--I have found a string of commonly held beliefs:

These beliefs fuel shoplifting and stealing. Most people are unconscious of their thoughts or they may be prone to "stinking thinking." All behavior--whether freely chosen or stemming from an addictive-compulsive mind set-originates from our thoughts, beliefs, and values. Strong feelings bolster this foundation and, eventually, we act out habitually or with hell-bent righteousness.

I know a woman whose father shoplifted. "He used to tell us: 'It's there for the taking.'" What beliefs would you guess are behind that statement? Would it help to know her father was a war veteran who felt less than heroic, was discontent with his own life choices, and felt powerless, passionless, resentful?

How about the well-to-do woman who has been arrested twice for shoplifting dolls twice in the last year since her child died?

This book is a call to action-not about making excuses! We've lost our compass. We need to look at ourselves in a new way. We point the finger at the world, everybody else. Or we point our finger at ourselves.

"Thou shalt not steal" is more than a commandment. It is a prerequisite to a life that works: for each of us and all of us, individually and collectively.

With most addictions, we focus on dishonesty as a by-product of the addictive lifestyle. Here, we go to the core: we explore dishonesty-in the form of shoplifting and stealing- as the primary manifestation of unresolved issues and erroneous, destructive beliefs.

This book is like no other. Hopefully, there is something here for everybody: shoplifter, family or friend, therapist, judge, probation officer, attorney, police officer, store or business owner, minister, or student of human behavior. I ask you to take your new insights and apply them to make a difference in the world.

Copyright © 2006 by Terrence Daryl Shulman All rights reserved. No part of this book shall be reproduced or transmitted in any form or by any means, electronic, mechanical, magnetic, photographic including photocopying, recording or by any information storage and retrieval system, without prior written permission of the publisher. No patent liability is assumed with respect to the use of the information contained herein. Although every precaution has been taken in the preparation of this book, the publisher and author assume no responsibility for errors or omissions. Neither is any liability assumed for damages resulting from the use of the information contained herein. Published by: InfinityPublishing.com • 519 West Lancaster Avenue • Haverford, PA 19041-1413